An amazing singer and entertainer, Janet plays multiple tributes to three of the most iconic female vocalists of all time, also Soul & Motown, Reggae & Gospel.  The soulful voice of Janet Jaye is the perfect accompaniment to your evening at El Oceano!!  Book your table! 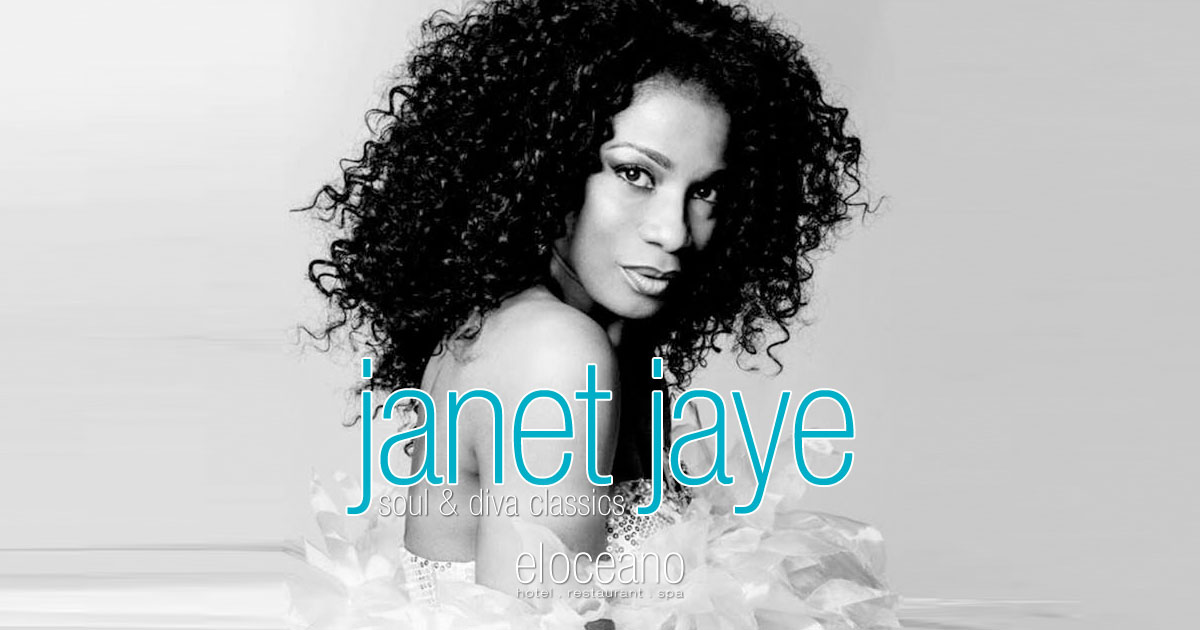 Janet’s voice lends itself easily to most types of music (Jazz, Motown, Reggae, Soul, etc.) from the 50’s to the present day.  She started out like more than one great soulful singer, in her local church singing gospel songs and some of this fine quality can still be heard in her voice.  She brings a real vitality to every show here at el Oceano, so many of our regular guests have asked about her future shows here and we’re happy to have confirmed many dates for 2019!!  BOOK NOW!!

The tour travelled extensively throughout most of Europe and the United Kingdom. After joining a modeling/promotion agency, promotion work and modeling became a full time occupation, working at exhibitions such as “The BBC Food Show“, “The Motorshow“, “The Ideal Home Shows” etc. At the same time whilst studying in the evenings. After passing the Lamda examination with distinction.

Janet was approached to sing the songs of “Whitney Houston” as a sound-alike look-alike in a show that would prove popular for more than 2 years, travelling as a solo artist to Berlin, Switzerland, France, and Spain etc eventually returning to the U.K.

Inspired…. within a week of her return she wrote and recorded a song that won “The Voice Newspapers” search for the best in British singing talent, a contest that attracted over 600 entries which was judged by “The Pasadenas” and “The Cookie Crew”, amongst others,
The decision was made then to front her own band as Janet Jaye at that time going by the name of Janet Lewis. Song writing and inputting her own individual feel in this Jazz Funk outfit performed at The Ronnie Scotts Club (Birmingham) on more than one occasion.

It is easy to see why Janet’s voice evokes such emotion in the listener, It is both the soft enriching tones that you can hear when she sings songs like “My funny Valentine” or “Somewhere over the rainbow” for example these do captivate, but then combined with the powerful rich sound that can be heard in some of the up-tempo numbers, such as “Sign sealed Delivered”, “Car wash”, “Aint nobody”, and many of the great Motown hits, Its easy to see why the dance floor stays full and audiences marvel at her versatility.

Singing at many a Garden Party, Wedding, Bat mitzvah, Corporate and Charity event, it is not just her voice but also a great sense of humour that makes the performance such a pleasure to experience. With a radio mic in hand she will if the mood takes her, leave the stage and walk in amongst her audience to sing a song and maybe share a little banter with them or a waltz with some lucky chap all this whilst singing,

Impossible? Yes maybe for some, but then Janet Jaye, has to be seen to be believed.

Two of the biggest legends in music, Whitney Houston and Tina Turner join us (in spirit!) for an amazing evening at El Oceano!  Performed by the amazing singer and entertainer, Janet Jayes, it’s a night of classic songs, fantastic food and great company and the coast’s best beach restaurant!  A fantastic night, guaranteed!  Book below!

The last event event was on Tuesday 5th of May, 2020
As of today, there are no confirmed future dates for 'Janet Jaye'. As soon as dates are confirmed, we'll let you know!